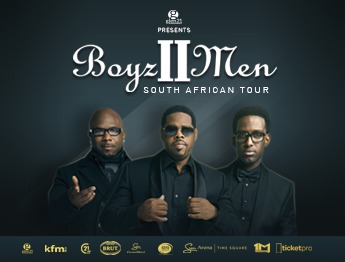 All information regarding refund options will be communicated to all ticket holders by the end of the week 20 March 2020.

Boyz II Men remains one of the most truly iconic R&B groups in the music industry history. The group redefined popular R&B music and continues to create timeless hits that appeal to fans across all generations. The band has penned and performed some of the most celebrated classics of the past two decades. The group's 4 Grammy Awards are just the tip of the iceberg: throughout their 25-yearcareer, Boyz II Men have also won a whopping 9 American Music Awards, 9 Soul Train Awards, 3 Billboard Awards, and a 2011 MOBO Award for Outstanding Contribution to Music, a star on the Hollywood Walk of Fame, as well and a Casino Entertainment Award for their acclaimed residency at the Mirage Resort and Casino in Las Vegas, which has been ongoing since 2013. The band will be returning to South Africa for shows in Pretoria at Sun Arena at Time Square and Cape Town at Grand Arena Grand West in April 2020.

Age Restriction: No Under 13s